11 WAYS YOUR CHILDREN BENEFIT WHEN YOU DECLUTTER THE TOYS

Toys are one of the things that drove me crazy before I decluttered our home. They would somehow find their way into every room and I’d be forever moving and tidying them, picking them up or stepping over them. When I decluttered the toys I thought my kids would complain and ask me where they all went. But they didn’t and it turned out to be one of the best things I ever did! Check out this post for 11 ways your children can benefit when you declutter the toys.

I’ve always encouraged my children to put their toys away once they’ve finished playing with them but there were always some that got left out and it would be me that would end up clearing them away.

I waged constant war against the toys and no matter how many rounds of tidying up I did during the day, I would still be clearing them away in the evening when I’d much rather be doing something else.

Deciding to declutter the toys was one of the best things I ever did. There were fewer toys, which meant less tidying, less picking up and less clearing away. Less stress and more time for me to do other things.

But is wasn’t just me that ended up benefiting. The best part of it all was that my children benefited too, in ways that I hadn’t even anticipated. 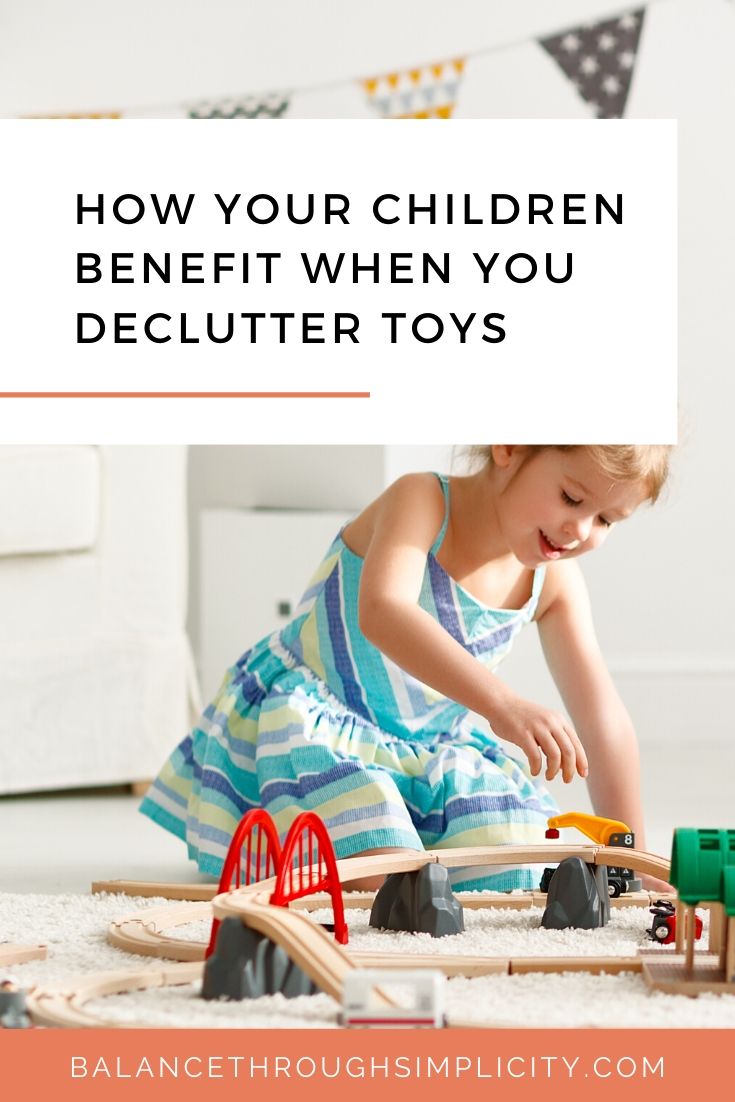 THE BENEFITS OF HAVING FEWER TOYS

The first and most obvious benefit to my children was that they had more physical space in which to play.

Most of their toys are kept in their bedroom as we only have a small house and no dedicated playroom. They bring out what they want to play with into the rest of the house and when finished they return it to their bedroom to get the next toy (this took a while to get them into the habit – it didn’t magically happen straightaway!). Their bedroom isn’t huge and they share it with bunk beds, so having fewer toys made a huge impact on the space available.

We no longer had loads of storage space, boxes, bins and overflowing cuddly toys. Instead the girls can have more space to move around, they can see the floor and have plenty of room to play on it.

They tended to play with the same old toys anyway and seldom played with the others. If they did, it was usually to the point where they got them out, played with them for a couple of minutes and then went back to playing with their favourites.

By decluttering the toys, you are reducing your children’s choice, but you’re forcing them to play with their existing toys in creative ways.

Decluttering the toys will not only help you by removing some of the stuff that you have to look after, but it also benefits your children by allowing them to focus on the toys they do have.

Children get overstimulated when they have too much choice and too many options. They don’t really take the time to play with a particular toy, but instead tend to just pick it up and move onto the next one that catches their eye really quickly.

If your child doesn’t have many toys then they will find different ways of playing with the toys they do have.

This is why I let my children keep toys that are multi-functional and can be used in lots of different settings, for example, dressing up clothes and mini figures. They can go on all sorts of adventures, be used in a variety of stories and role play games and won’t limit your child’s use of imagination and story-telling skills.

5. Enhances social skills and interaction with others

When a child has lots of toys they don’t need to play with anyone else.

When you remove the toys, a child is much more likely to find another child to play with. It develops their social skills and awareness and encourages them to develop relationships with people, rather than things.

6. They don’t need to be entertained, they find a way to entertain themselves

It goes back to the kind of childhoods we probably experienced ourselves, before technology and advertising took over.

Children will learn to find happiness and fun wherever they are, regardless of whether they have a toy or toys to do the entertaining for them.

When children stop expecting or owning physical toys they become more aware of other, less tangible, things that can make them happy.

They enjoy playing with other children more, playing outside, role play games and just mucking around in sand, on grass, in trees, in playgrounds and gardens. They don’t need actual toys to make them happy and they learn that happiness isn’t just bought or a quick high when you go shopping.

Kids learn to find happiness in other ways, rather than just a trip to the toy shop.

When it comes to choosing which toys to keep I suggest keeping those toys that encourage creative and imaginative play.

Some examples are Lego, blocks, dressing up clothes and little figures. These can be used in a variety of ways and situations with a bit of imagination and role play. I’m also happy to buy art and craft supplies because my kids love to draw, paint and be creative.

The toys I don’t keep are the ones that do all the play for you. The ones with noises, lights and that can’t be used in different ways.

If your children are used to having lots of toys they become familiar with the feeling of excess. They don’t learn that possessions have to be earned rather than expected, they don’t learn to value each and every toy that they have and make the best of it.

Their expectations are set too high for such an early age and they don’t appreciate the value of what they already own. Once they’ve used a toy up, they will look for the next one to entertain them, and the next and the next, never satisfied with what they’ve got.

Taking away the majority of their toys will help them appreciate and value the ones they do have. 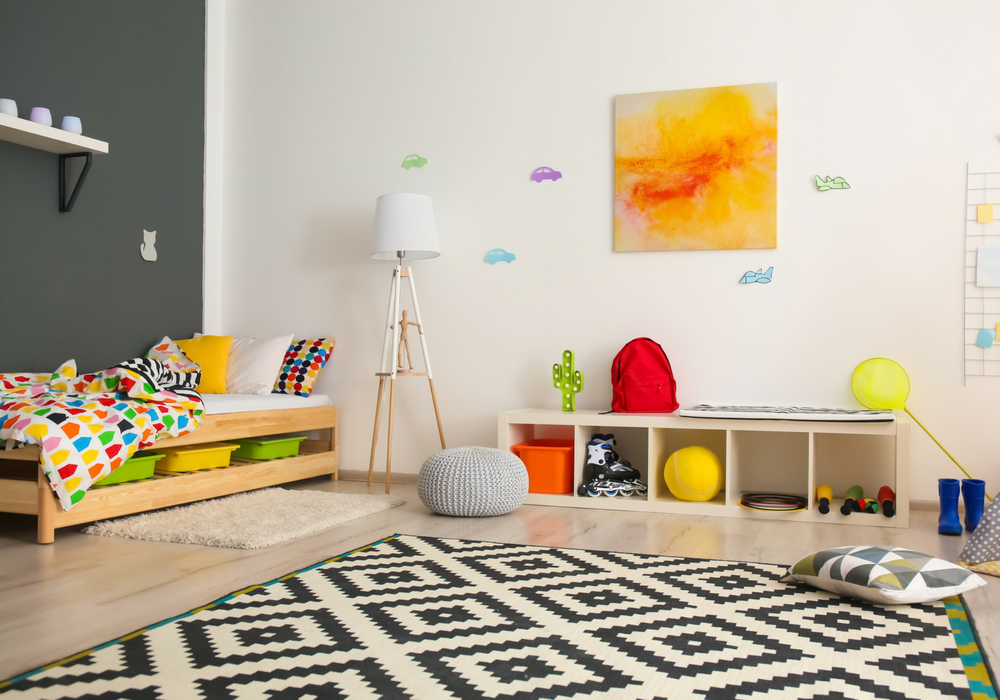 10. Teaches kids to look after their belongings

When your children have less toys it becomes more important to them that each one looks good, works well and does the job for which it’s intended.

They’re much more likely to look after their toys if they don’t have something else to go and play with, or a replacement should it get broken or lost.

11. Helps them understand that some children aren’t as fortunate

When I asked my children to help me declutter their toys and I explained why I was doing it, we talked about where their unwanted toys will go.

We threw the broken ones away but donated the others to charity. The process helped my children understand how lucky we are and that there are plenty of children who have less than we do. They love the thought of helping them by sharing their toys.

My kids are now quite happy to declutter their toys regularly as they know they’re going to a great cause.

These are just some of the ways that my children have benefitted from having fewer toys. Although they all sound fantastic (and they are!), it wasn’t without its difficulties in the beginning.

Hi! I’m Antonia. Reformed workaholic to passionate advocate of simple, intentional living, I hope to inspire and support you with practical tips to simplify life. Read on…

We use cookies to ensure that we give you the best experience on our website. If you continue to use this site we will assume that you are happy with it.OkNoRead more